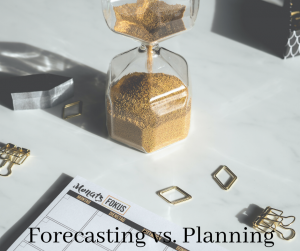 To do justice to understand the salient rules of effective prediction better, we have structured this article in a manner that first explains the difference between forecasting and planning. So that the real scope of forecasting and its importance and limitations to the organizations better appreciated.

Forecasting refers to analyzing the future about the business operations you intend to undertake concerning the core objectives of your business. The process of predicting involves collecting data and facts. Both from the past, present, and corroborate them to foresee the future and their likely impact on business prospects.

Forecasting involves the application of either quantitative techniques, as time series, regression, econometrics, analyses, or qualitative ones as consumer surveys, even perceptions of the managerial teams within the organization.

On the other hand, planning is a managerial attribute. It helps businesses in establishing when and how activities would have to carry out.  It is a goal-driven, continuous process wherein the responsibilities lie on the part of top managers, whose intellectual inputs also matter, as the eventual outcome based on just not hard facts but perceptions as well.

Planning facilitates your firm to get connected to the future environment by bridging the gaps between the present and future. With a plan, you can look into the future and make decisions to deploy your resources. According to not only the objectives of your business but also the opportunities, it throws open.

It may not be proper to pitch forecasting and planning and make them as though they look one against another. Both plans require demonstrated abilities, farsightedness, reflective thinking on the part of the experts to make informed decisions.

It is conservative considered a golden rule of forecasting. Because it adheres to the norm of being consistent with the cumulative knowledge acquired from the past and present, it enables forecasters to stick to the problem on hand. And focus on working on the issue by being part of a solution.

Rule 2: Define the scope of uncertainty

The cone of uncertainties characterizes almost all the businesses. The current Covid19 is one example that has surpassed everyone’s comprehension. In such a scenario, one possibility is making wild guesses and predicting doomsday gloom based on assumptions rather hard facts. It is here forecasting based on hardcore data. It includes something like what had happened in the year 1918 when we had a similar situation. And asking hard questions on the current scenario would help businesses to grasp as to how one can cope with the future. In other words, uncertainties are wild cards. And there plenty of them around us, which may look external and not relevant to your business, but when it impacts you, the effect is so devastating.

Defining uncertainty reduces the scope of guesswork and improves the utility of forecasting.

Changes are never linear. They start slowly, gain pace incrementally, but when it strikes, it explodes. Much of the developments follow the pattern of S-curve, which based on Moore’s Law of doubling once in 18 months.

With this rule, forecasters better placed to identify an S-curve when it begins to emerge so that they can focus on the inflection point and its inevitable precursors.

Rule 4: Look at things more carefully that do not fit.

Due to the general aversion we have towards uncertainties, there creeps a tendency to ignore indicators that do not fall into familiar boxes, even when they loom large bequeathing our attention, which we fail to take note.

If forecasters ignore this rule, it can cause peril to the validity of their forecasting because you may overlook the changes that may take place in your business, which can result in your losing sight of smart ideas that can lead to grand success.

Rule 5: Avoid over-relying on a single piece of information.

Secure information does not necessarily mean reliable and actionable information. It often missed the sight of arising out of the bias of the forecasters. To collect something on this belief and their tendency to rely excessively on it.  When they commit this mistake, ignore the evidence that could contradict their conclusion.

To make good forecasting, the forecasters would have to stick to this contra rule of holding weak to secure information.

Rule 6: Look back while looking forward.

It is equivalent to staring into the rearview mirror while steering forward. Looking at the old rearview mirror offers the forecasters’ powerful forecasting tools. They can weave the fabric on the texture of past events to connect the dots of the present, which helps in mapping the future trajectory.

Rule 7: Knowing when not to make a forecast.

This rule may be peculiar, but it is of relevance because human beings, by nature, are fascinated by looking for newer things. They keep on asking, ‘what’s new.’  And this acts as a liability on the forecasters who compelled to make forecasts for the sake of it. To an extent, this would apply to the current pandemic with several predictions made of its long term impact, recurrence, etc.

While concluding, it is appropriate to refer to the limitation of forecasting. It is not as if whatever forecasted can or would turn out accurate. It can map uncertainty, but it is not soothsayers to predict the difficulties.

The take away of this article is that forecasts have to incorporate logic. These rules make it possible to do so, and when done so, it makes it different from mere predictions. These rules also lend reasoning to their logic with which they can defend not only the philosophy but themselves as well.  Eventually, the organizations would benefit when they apply logic to their action.